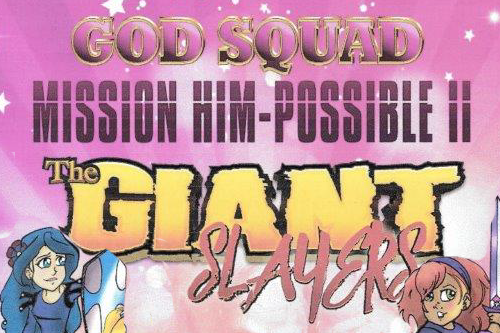 The God Squad in an episode of Mission Him-Possible II (The Giant Slayers) by Darlene Laney is a Christian-themed story for young people. Taylor is a pupil at Carver Preparatory and has fallen victim to severe bullying. Too frightened to tell her mother what is really going on and knowing that the principal regards bullying as mere “girls being girls,” Taylor finds herself in increasing great danger. But then mentor Angel steps in – Angel is part of the school God Squad and they make helping Taylor their next mission. Not only that, with Taylor’s help they set out to convince the that a school Anti-bullying Policy is needed. Facing struggles and setbacks, the girls know they need the power of prayer and faith in “the giant slayer” if their mission is to be a success.

Darlene Laney’s book is a story on a mission – to support and inform young people about the dangers of bullying and the importance of dealing with it correctly. The characters are strong and good role models for readers. The line drawings at the start of each chapter and the character bios at the end of the book are a nice addition and complement the story well. Too many students and schools are affected by bullying, and young people afraid to ask for help may find comfort and support in the inspiring way things are handled by the characters in this story. Both Angel’s and Taylor’s points of view are narrated, giving readers the chance to develop empathy for both the victim and the helper.

I liked the occasional in-between chapter messages to readers, inviting them to consider their own situation or behavior. Bible-based with an emphasis on trust in God, faith prayer, I can see this story being used in church or school groups by leaders/teachers needing a pupil Christian resource. It would open up discussions about bullying and behavior towards others whether you are the victim, the bully or the one with the chance to help. As such, a thoroughly useful book with a strong and vital message for students, parents and schools alike.

Darlene Laney is a wife, mother and grandmother residing in Fresno, California with her husband Carlos Laney.